After a tough and spectacular race Richard Verschoor has won the prestigious Formula 3 Macau Grand Prix – FIA F3 World Cup Macau. The TeamNL and MP Motorsport driver made his debut at the treacherous street circuit in Macau and is the first Dutch driver who wins this prestigious race! The list of names of Macau Grand Prix winners contains legendary drivers like Ayrton Senna, Michael Schumacher and David Coulthard and now Richard Verschoor is one of them. “This is the greatest vicorty of my career. I still can not believe it!”

Heavy Pressure
The Formula 3 Macau Grand Prix – FIA F3 World Cup is an annualy returing famous and notorious race where the best Formula 3 drivers fight for victory. The street circuit is a little over 6 km long and contains long straights, fast curve combinations and high guardrails right beside of the narrow track. Every mistake on this is punished hard and the driver really can make a difference.

Verschoor liked the circuit right from the start. “Before the start of the first free practise I was a little nervous. I knew this track was narrow but when you drive it for the first you really notice how narrow the track really is. I prepared myself really good for this race and build my pace up bit by bit”.

Slipstream
Verschoor finished the qualification race on Saturday in fourth position which was also his starting position for the Grand Prix race on Sunday. He was able to overtake two of the other competitors right at the start of the race due to excellent use of the slipstream.

A few laps later the safetycar came on track and at the restart of the race Richard Verschoor repeated his overtaking maneuver and managed to overatke the leader of the Formula 3 race. With several laps to go Verschoor came under severe pressure of the driver behind him but managed to counter all of the attacks and stay in front. At the end of the race Juri Vips (the driver in second place) made a final attempt to overtake Verschoor but out braked himself. “Vips was very fast this weekend and I knew the restart was my only change to overtake him. I tried to repeat my action from the start of the race and that worked perfectly! After that the pressure was extremely high until Jari made a small mistake.”

“Incredible”
“This is incredible! Macau FIA Formula 3 Macau World Cup Rookie and Winner! This is so cool! Winning the Macau Grand Prix is a dream come true! I want to thank everybode who did support me, MP Motorsport and of course my sponsors,” Richard Verschoor reacted shortly right after the race! 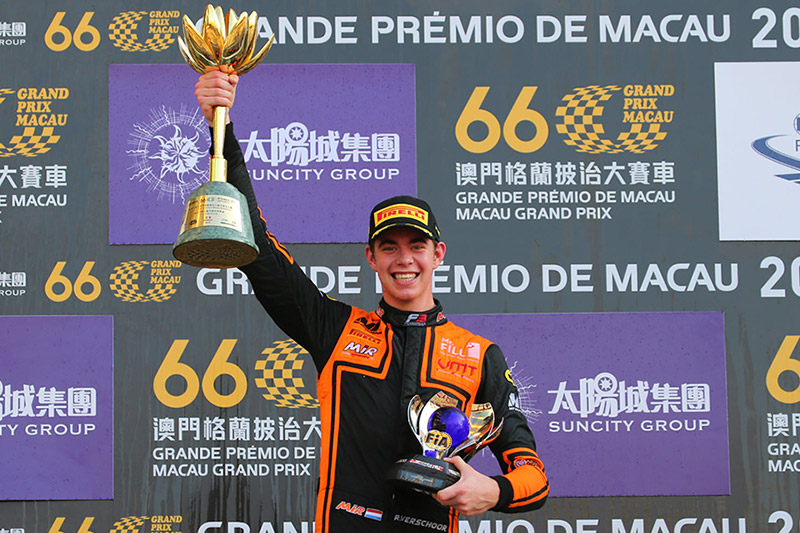